In the latest boxing News, Miguel Cotto might be a tougher than Mayweather, Pacquiao says, and we might witness a 12-round match on November 14 through our Live Stream.

Manny Pacquiao once revealed on TeleGraph.Co.Uk that Miguel Cotto might be just a tougher nut to crack than the still undefeated Floyd Mayweather JR. The fight between these two big time boxers is scheduled for the 14th of November, 2009. Pacquiao thinks that this fight may go to distance and hit the 12th round, which makes this fight deceivingly look much tougher than a Pacquiao Mayweather fight that we might come to see in the first half of 2010. 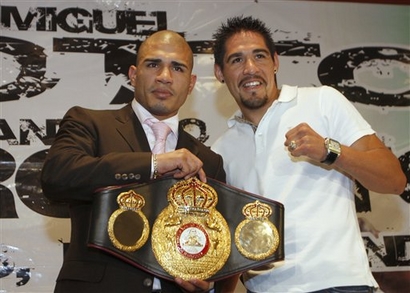 We’re talking here about the Peoples Boxing Champion of the Philippines, ang pambansang kamao ng Pilipinas (The Philippine National Fist), and therefore I’m more than delighted to inform you that we’ll be able to provide free quality streaming for the Pacquiao Cotto match on November 14! We will keep you updated about this in a future post as the fight is still a bit distant. Rest assure that this time we won’t disappoint you and that we’ll be preparing multiple choices of channels to pick from that you can use for your advantage, all through the SopCast Live Stream Player.

But before we head into more details about the live stream, I’ll leave you with these few words to avoid boring you too much. Hope to see you around the blog and please don’t forget to subscribe to our posts via email (upper right box) in order to be updated when the live stream channels will be launched and available for public access

This site uses Akismet to reduce spam. Learn how your comment data is processed.

We are Pinoy Teens

One of Philippine's first when it comes to entertaining, informative and educative content.